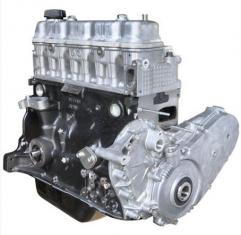 We distribute an extensive selection of NISSAN FORKLIFT ENGINE parts for all makes and models. We ship directly from various warehouses located all over North America to provide the fastest shipping at the most affordable prices.

There are many things that can be said about the impressive and state of the art forklift engine technology from Nissan. It is, however, of primary importance to trace this impressive evolution, development, and advancement to when Nissan started dealing forklifts in 1957.

The formal days of forklift business in Nissan started during the times when the competition was still not able to catch up with what they’re doing. The highlight of their initial production days went off in 1961 when the company initiated for a decision to mass-produce the forklifts they have in their lineup. Through an assembly line in Japanese Totsuka Plant under the company Shinnikkokukogyo Co. Ltd., Nissan was starting to locally manufacture their forklifts and then build networks in Spain.

The expansion in Spain established the name and reputation of Nissan’s forklifts and built the name, Nissan Motor Iberica S.A in 1989. This was the stage that Nissan found itself to then establish its network in North America. It was there that it officially opened on 1993. This was the time that Nissan found all the capital to merge its forklift industry with their sales and manufacturing activities.

The new Spanish entity of Nissan then formed a new firm in 1995 which was then called the Nissan Forklift Espana S.A. immediately after the separation from Nissan Motor Iberica. Later on, Nissan built networks with Mitsubishi Heavy Industries and finally reached in Shanghai and Sweden, around October 2007.

What distinguishes Nissan Forklift Engines today is the fact that they make use of advanced technologies in the market to deliver the needs of a business. Whether the forklifts are for indoor company use or for heavy-duty outdoor utilities, the Nissan Forklift Engines have the answer that can warrant the trust of the company acquiring the forklifts. It is to be mentioned, too, that the Nissan Forklift engines surpass the strict regulations set by USA, Europe, and Japan. The productivity-boosting features of such engines are also impressive in other ways, especially in how they contribute to their remarkable fuel economy.

The first of the forklift engines of Nissan is the DX Engine Forklift. It has a 1.5 - 3.2 TONNE capacity, available for LPG and Diesel systems. It must be mentioned that this series is one of the most efficient engines with the lowest emission levels, and this is because of its 3-way catalyst system. The optimal fuel consumption of this series has been integrated with Nissan’s ECCS LPG-engine Low noise levels, assisted by a cabin that’s full-floating.

The series is renowned for a comfortable working environment feature that uses the most up-to-date ergonomics system available in the market. Moreover, there’s a fingertip option for this engine, and this helps for an efficient truck handling system that’s safe for the drivers or operators. Aside from that, this series also has a Built-In Test Equipment (BITE) full-onboard fault diagnostics for better quality and risk control, as well as an Electronic Maintenance Reminder.

The second forklift engine under Nissan up to this day is the LX SERIES. It has a capacity of 1.5 - 3.6 TONNE and runs on LPG. It is known in the industry as well-calibrated to power up with a very tight turning radius and truck stability that helps for maximum storage and transport. Its 3-way catalyst provides for an impressive level of low emissions that the market has not seen a lot of.

Its other features include low noise levels to ensure that the operator has less fatigue in running it and an extensive set of safety features, which include free Cushioned Stability Control. The optimal fuel consumption running the engine is under the Nissan Forklift LPG-engine, and that gives it a powerful advantage over others. It adds to its power, too, that its engine has a simplified maintenance operations integrated within a digital maintenance diagnostics. All things considered, the LX series remains to be a powerful choice among operators who trust the engine capabilities of Nissan.

The LX 35 Engine puts Nissan’s name as a powerful forklift manufacturer mainly because this series has a 3.5 Tonne LPG and Diesel capabilities. Other than that, this engine’s standard 3-way catalyst has also given Nissan the reputation of being a producer of market-approved engines that have the lowest emission levels. What builds this engine’s consumption power is its ECCS LPG-engine that’s electronically controlled in the most optimal level.

There are low noise levels in this engine that helps operators cope with fatigue, and it has a Nissan Risk Reduction system to temper the driver or operators’ risks when running the forklift. The Maintenance-free Nissan Cushioned Stability Control of this engine also makes for an outstanding choice for companies that want the most minimal costs. With this engine’s Ultra Low Exhaust Diesel Engine or Cat IIIA and its electronic maintenance reminder, a company will be hard-pressed to find a better alternative.

The GX Series engine from Nissan is characterized by its 3.5 - 5.0 Tonne capacity in its LPG and Diesel versions. It has a rugged and solid build that’s designed to withstand the greatest wear and tear in the harshest environments imaginable. The Nissan ZD30 diesel engine is ingrained in this series and gives the forklifts its renowned lowest emission levels that make for maximally optimized fuel consumption. This engine series comes, too, with clear surround visibility and full onboard fault diagnostics, making all the forklifts in the selection fully safe and regulated in terms of risk and fuel costs.

We can add here that Nissan’s Forklift Engines have also earned the respect of international companies. With more than 800 dedicated outlets across 75 countries all over the world, Nissan has made a name in delivering fantastic engines accompanied by an exceptional sales force that’s able to deliver the needs of companies. The operational reliability of the forklift engines of Nissan has clearly been translated well in the way its sales department is run.