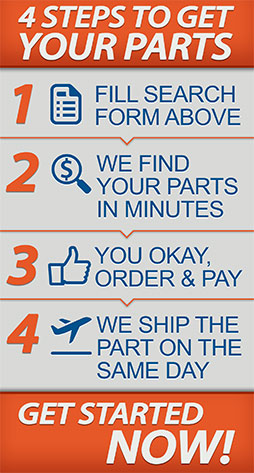 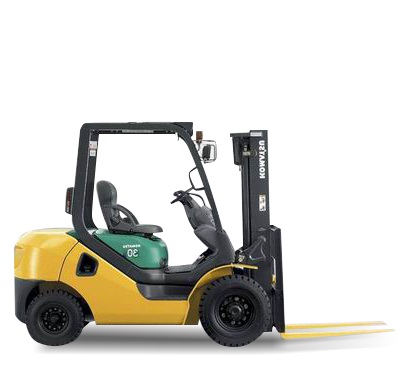 We distribute an extensive selection of KOMATSU FORKLIFT parts for all models.

We ship directly from various warehouses located all over North America to provide the fastest shipping at the most affordable prices.

Searching for and buying genuine parts for your forklift trucks is both overwhelming and time consuming. Solid Lift Parts is committed to make your forklift parts buying experience as effortless and as enjoyable as possible. We offer a wide range of lift truck parts for various makes and models of forklifts at the most affordable prices. We at Solid Lift Parts take utmost care in updating out parts inventory on a daily basis, so our customers get to pick every single model of forklift parts they require. With our certified and thoroughly trained forklift parts experts, we take pride in offering you top quality brand new, used and rebuilt Original Equipment Manufacturer (OEM) as well as aftermarket lift truck parts, helping you to maintain your costs down and your forklift fleets operating at peak performance.

Komatsu bears a hugely renowned name globally in the industry of material handling, and mining equipment. Komatsu forklifts are supplied by Komatsu Ltd Japan and the company is headquartered in 2-3-6 Akasaka, Minato-ku, in the capital city, Tokyo. Komatsu is also a leading provider and supplier of construction, industrialand military equipment in the world. Komatsu is a Japanese giant, and is considered the second largest supplier of mining and construction equipment in the world, second only to Caterpillar. The manufacturing operations of the company have their presence in Japan, Asia, Europe, Americas and African continent, thereby encircling the whole of modern world.

The basis of Company were laid back in 1917, when Takeuchi mining industry established Komatsu Iron works as a company manufacturing mining and machine equipment at a smaller scale, which meant that they only workedon doors. Komatsu formally assumed the name Komatsu Ltd, and became a public company on May 13, 1921, after getting divorced from Takeuchi mining industry. Komatsu started with the production of the first agricultural tractor farm-crawler that was released in 1931. During 1930s, they were involved in producing machinery and equipment for the government and military use, providing essentially forklifts and bulldozers.

The decade of 1940s enabled Komatsu to work on the hydraulic systems and diesel engines production, which took place in 1941 and 1948, respectively. Meanwhile, the head office of the company was shifted from Ishikawa to the capital city Tokyo. The era of 1950s blessed Komatsu with the establishment of another great name under their growing emblem, Kawasaki. They acquired Ikegai automobile company and established their repute in automobile industry as well. 1953 is the year that marked Komatsu with the production of forklifts and the same year Komatsu started producing dump trucks and special purpose automobiles. The company never stopped looking beyond the horizons and their first export venture of construction equipment took place in 1955, when motor graders, along with multipurpose hydraulic presses were exported to Argentina. Moreover, the production of bulldozers filled a high demand in the reconstruction of the country during the era of 1950s.

In 1957, Komatsu was not self reliant for all technologies that were used in the machines, including their engines. By early 1960s Komatsu has had established its plants in various cities and made their presence in the growing economy of developing India. The globally flourishing business of Komatsu now required an emphasis upon strict quality controls measures, which were introduced as early as 1961 and were meticulously enforced,company wide. As a result, Komatsu earned Deming prize for Quality Control just three years after, in 1964. By the same year, they started exporting their construction, material handling and mining equipment to the world on a larger scale. The quality assured and widely exported range of Komatsu equipment earned their name and contributed heavily to improve upon the low quality image of Japanese products.

Komatsu took on the US market, competing with Caterpillar on 1967. They assumed the name, ‘Maru-C’, which literally translates to ‘encircle caterpillar’. They also partnered with Dresser Industries to produce mining tractors. The partnership lasted for nearly six years before Komatsu formally purchased the shares of Dresser.1970s marked Komatsu‘s presence in the United States by the name Komatsu America Corp. During the same decade, Komatsu expanded itself to Singapore and eventually Australia, in addition to having co-working agreements with technology and diesel engine manufacturing companies in the United States. The company went public in US, Singapore, Brazil and Australia by the end of 1970s, with their influence continually growing in many countries,including theUnited States, by the end of 1980s.

The success story progressed by leaps and bounds in the following decades. 1990s had been the most eventful decade for Komatsu when they made substantial progress in hydraulics, casting plants, lift trucks, wheeled excavators and engines. The company had now grown gigantic with its presence in almost all parts of the world including the African continent. Komatsu’s operations are anchored on providing DANTOTSU to its customers so that the businesspersons’ GEMBA (or workplaces) will be improved along the way. Dantotsu is an abbreviation of “danzentoppu”, which means pinnacle or first place.

Komatsu is primarily known for its heavy duty bulldozers, offering the largest bulldozer in the world dubbed as the D575. The company is also known for the production of earth-moving and heavy equipment units like the 360-degree turning excavator called the Komatsu PC200-8 Hybrid, which stores energy, making it more fuel-efficient.Komatsu offers a wide array of forklift trucks for efficient material handling. Buyers can choose from the battery and the engine-powered forklifts. The forklift trucks are available in different configurations and capacities starting from 1.0-3.5 ton to 40-43 ton forklifts for those powered by internal combustion engines. Electric trucks are also available starting from the basic 4-wheel 0.5-9 ton trucks to 4-Wheel 1-1.8 ton forklifts and they recently introduced the famous REACH series electric forklift ranging from 2.0 – 2.5 Tons.

Komatsu and its CSR Themes

Alike the other top-tier companies, Komatsu is also actively involved in Corporate Social Responsibility (CSR). Komatsu defines its CSR module as an organization actively responding to the demands and expectations of modern society by means of their core businesses. The company promises to enhance the community’s quality of life by using information and communication technology to enhance energy conservation and productivity. Product life cycle drive makes Komatsu an environmentally friendly organization having acquired ISO 14001 compliant status. The company is also actively involved in less polluting bio fuels technology for its contemporary and future productions. Komatsu have also invested in its people so that it can develop them the ‘KOMATSU Way’. They also promise to grow with the society by engaging stakeholders in dialogues.

Komatsu have been in the industry for decades and plans to remain in the business for a long time with an aim of achieving a ‘second to none’ status. The dream is being realized by offering its customers large varieties of quality construction products and equipment, including their versatile forklifts and trucks under the slogan, ‘Quality and Reliability’.

We should mention here that the global success right now of Komatsu is seen best in how it is able to meet a diversified set of problems from different clients. From providing material handling business problems of clients to educating clients how to avoid onboarding and bottleneck issues, the wide selection of lift trucks from Komatsu have the answer.

From FD/FG15～18-21 to FD60～80-10 to FD200/250-7, these forklift models have the right capacities, features and attributes that empower clients. They’re all powerful, cost-effective and are in impressive high performance level and have heavy duty brakes. These forklifts all have precise and beautifully engineered innovation in safety and comfort, serviceability and reliability. Komatsu doesn’t also lag behind in terms of information and communication technology. These models also have the lowest emissions without compromising the fuel economy and the models’ high pressure common rail (HPCR).

We should not forget, too, that the heavy duty brakes of Komatsu forklifts have been regarded to be the top in the market. They are made of sealed wet disc brakes that are both large capacity and provide superior overheating resistance. The automatic transmission from Komatsu has also never failed the operators running them. There’s also an acceleration rate in all these models that have not been seen in most of their competition. Consequently, the Large Fuel Tank for all the Komatsu heavy equipment have shown reduced fuel usage for the companies that acquire these machines.

The charging system of a vehicle consists of a battery, the ...

Forklift Gasket Seal Kits are used to protect the correspond...

Forklift fan blade is a highly important component of the fo...

Forklift Master Cylinder is one of the most important parts ...

A Forklift Water Pump transports water to the engine from th...

Joysticks are a platform invented to gain a more precise and...

Forklift Seal Kits are used in containing fluids and keeping...

The forklift clutch disk engages and disengages with the fly...

Forklift Tires and Wheels come in different types, depending...

Forklifts may seem like a simple, wheeled vehicle with a cou...