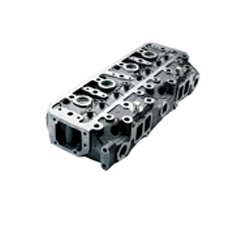 We distribute an extensive selection of FORKLIFT HEAD CYLINDER parts for all makes and models. We ship directly from various warehouses located all over North America to provide the fastest shipping at the most affordable prices.

Commonly found in internal combustion engines, the Head Cylinder is located on the upper part of a cylinder block, just above the cylinders. The internal combustion engine works to its optimum level when all of its parts and components are properly maintained. In IC engines, it usually sits right above the cylinder, closing the top of later and forming combustion chamber. The joint between cylinder and head is sealed with the help of metallic gasket, which fits in the irregular surfaces and seals off the joint for leakage prevention. Cylinder head also provides air and fuel passage to the cylinder, with allowance for exhaust. In may Forklift engines heads provide housing to valves, spark plugs and fuel injectors.

Forklift engine models come with flathead and overhead valve design. In flathead design all parts of valve train are contained in the block, where as head is bolted on top. The construction method is old but simplified, and affords ease of repair and maintenance. The construction model was used in older models of Forklift trucks. The problem with this engine however remained its inability to perform at higher rpm, which agitated thinking minds to come up with innovation of overhead valve, and overhead camshaft designs.

The head cylinder consists of many parts: intake valves, exhaust valves, springs, gaskets, etc. All of the parts serve multiple functions, including facilitation of air and fuel intake as well as dispersion of fumes away from the engine and into the exhaust manifolds. Cylinder head possesses passages called ports which allow fuel and air mixture to pass on to inlet valves from intake pipes and also for the exhaust gases to ravel out of the system. In Forklift engines using water and coolants as part of engine cooling system, the cylinder head also provides ducts for passage of coolant or water, which takes away excessive heat from the head and in turn from the engine.

Also known as poppet valve or a mushroom valve, an exhaust and intake valve is used for controlling the amount of gas and vapor that flows in and out of an engine. In forklift head cylinders, the intake and exhaust valves are guided by a shaft that slides though the part forcing them to open and close, letting the airflow in or out of the cylinder block. The valves operate by engine’s camshaft, located in the cylinder block, along with pushrods, and rocker arms that are co located within cylinder head. This system is timed perfectly with the rest of the moving components.

An engine configuration is essentially a function of number of cylinder heads. Present day Forklift trucks mostly use an in line straight engine utilizing a single cylinder head for all cylinders. However, Forklift and Aerial lifts built to perform heavy duty tasks may have engines modeled on having one cylinder head for each individual cylinder. This serves to reduce the maintenance cost and effort, in case a cylinder needs replacement. The design of a cylinder is one of the most important parameters for engine performance and efficiency, whereas the design of combustion chamber, passages and ports are responsible for determining volumetric efficiency and compression ratio.

The Forklift operator should note the different signs of potential failure of forklift head cylinder. One issue to watch out for is burning scent from the cylinder block. Additionally, one must be aware of any gray smoke that may come out of the exhaust pipes. This is also an indication that the cylinder head may have gone bad. The operator should routinely check for any signs of leaks around the cylinders. If identified, he/she should change the gaskets and seals in order to prevent any further damages.

Cylinder head cracking can lead to serious damages to Forklift engine to the extent that entire engine parts may warrant a replacement. The cylinder heads are usually customized for Forklift trucks, milled with precision for a smooth flush fitting in with connecting parts. A minor crack in cylinder will result in Forklift engine losing compression whereas a major crack will cause major damage to the engine cylinders. Hence, it is of prime importance, while carrying out a repair, that proper engine parts are used and fitted in the most appropriate way. A head cylinder Gasket, which is seemingly a small component in comparison with the enormous engine head and valves, can prove to be a key cause of cylinder head cracking, if gets blown.

Few manufacturing factors may also contribute to cracking of head cylinder. For instance in many Forklift trucks, the engine head is usually manufactured of Aluminum whereas the engine block is made of solid cast iron. When the temperature of the engine rises due to constant burning of fuel, both the cylinder head and engine block tend to be affected differently as their melting points vary. Though no such melting can be experienced however the expansion of metals upon being heated is a natural phenomenon, and due to the difference in boiling points, both parts expand at different rates, and can therefore lead to a cylinder head crack.  Overheating of cylinder head has been tagged as the most common cause of head cracking in Forklift engine. Upon overheating all the engine parts experience stress, and the cylinder head which incidentally is positioned in the centre of the heat gets a substantial effect. This can result is blowing of the head gasket which served to prevent any leakages. The gasket leakage adjoins cylinder head with engine base and their varied expansion properties can cause cylinder head to crack. An overheated Forklift engine if supplied with a cold water in the radiator for immediately bringing down the temperature, can also cause cylinder head crack. The reason to this effect is sudden change of temperature experienced by Cylinder head, which can cause it to reshape or crack.

Solid Lift Parts Inc. provides head cylinder parts for almost all makes and models. Contact your parts specialist today to get you the right part for your specific forklift, right away! 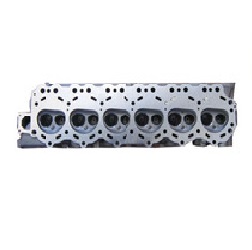 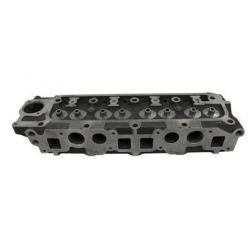