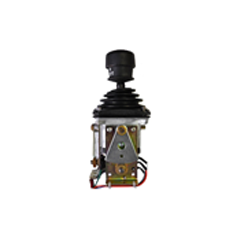 We distribute an extensive selection of FORKLIFT & AERIAL LIFT JOYSTICK parts for all makes and models. We ship directly from various warehouses located all over North America to provide the fastest shipping at the most affordable prices.

Joysticks are a platform invented to gain a more precise and handy control over the motion of an object. The invention is similar to the use of arrow buttons in traditional kid’s video games, which makes the control over moving characters in the game much effective and easier. The technology was soon adopted in commercial scale for more serious applications, and joysticks started replacing steering wheels, levers and handles.

Aerial lift platforms, being a sensitive piece of machine, incorporated this technology with gratitude since they require a precise and exact control over the movements of the platform and the lift. A little loss of control over the movement of a lift truck or an aerial platform can cause serious hazards to the operator and the carried load. The danger is more pronounced when working in much confined indoor environments or at the rough rocky terrain outdoors. Simple up down and lateral way movements of a joystick are, therefore, easy to operate with your fingers, and they make the huge machine run like a video game with enhanced controls.

Joysticks now effectively control the movement and reach of forklifts, aerial lifts and various other material handling platforms. These compact devices are precise for fingertip controls, which add to the mental and physical comfort of the operator. Modern joysticks are commonly mounted on armrest and chest packs, which led to the creation of more compact designs. Most joysticks are two-dimensional having two axes of movement. Presently, more advanced and effective three-dimensional joysticks are being produced at a mass scale, owing to their wide acceptability. Aerial and Forklift joysticks are programmed so that tilting the stick right, left, up and/or down commands the arms to move in the same direction it is tilted.  Since the joysticks are used excessively in the absence of other levers or buttons, they are required to be rugged enough for a long standing. Owing to their extensive use in rough environments, the forklift and aerial lift joysticks are built with heavy-duty components to be functional for a long life cycle.

The general operations that one can perform with the controls are vertical, lateral, rotational, platform/basket, and ground movement, where each of the movements are customizable with a traverse in varying degrees.

Joysticks are handy and easy to operate with effective control. However, this ease of control comes at a price, which is of safety concern of the man operating the machine (generally the load aerial lifts carry). Therefore, a certain number of safety precautions are mandatory to be taken well in advance, quite meticulously. Henceforth, any untoward happening can be prevented from the outset.

While operating an aerial lift, a few standard checks should be done to ensure safety. The foremost is to check the functionality of all the controls and gadgets installed in the machine. At the base of the lift, remote key switch should be turned on, enabling platform control, ground control, or remote control panels. Assess the kill switch button, making sure that it is pulled out and operable. Check that all consoles on the platform controls are readable. Operate the joystick, slowly at first, to raise the lift. Then, try the other joystick that controls the motion function of the lift. Understand, note, and practice all the other lift controls, including the tilt and rotate controls. Also, become familiar with the movement of the boom, relative to the position of the joystick controls. Addressing these safety precautions and other measures, as described in operating manuals, ensure safe operation of the machine for optimum output.

Global manufacturers such as Caterpillar, Clark, Hyundai, Mitsubishi, Snorkel, Genie, JLG Skyjack, Terex and UpRight are amongst the largest distributors of Aerial and Forklift Joysticks. Their designs are centered on producing flexible, high durability, high performance and comfortable to use joysticks for all machines. These companies design joysticks to meet harsh and rough operating requirements of industrial applications. Another area that these giant industrial manufacturers are focusing on is the ergonomic design and paramount systems’ integrity, which enables comfortable and efficient operations that yields maximum productivity. Being ergonomically optimum is becoming a prequalification for any machine to be accepted by the customers at large. All the forklifts, scissor lifts, aerial lift platforms, reach trucks and various other models used in material handling and warehousing are innovatively designed to produce best ergonomics. Moreover, the aspects of putting to use innovative technologies, and environment friendliness of the product are major benchmarks to be achieved by a company, in order to qualify for the worldwide sales of its products.

The major producers of joysticks for aerial lift platforms in the global market are all ISO9001:2008 certified which guarantees their consistent performance in producing quality equipment. However, despite the durability of the joysticks, they can be subjected to wear and become non functional. One common issue is the triggers become sticky, unusable and/or lose its precision when synced with the lift machine. Also, the battery of remote controls may lose its chargeability and may need to be replaced. New applications are available that are designed to minimize downtime with assemblies that are easy access for replacing joystick sub-parts such as the trigger, grip, and boot.

Solid Lift Parts Inc. has a wide variety of joystick parts and assemblies to choose from.  Contact your parts specialist today to find you the right joystick for your specific lift machine, right away! 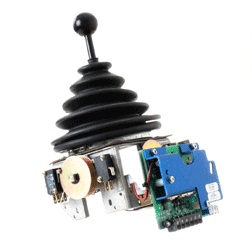 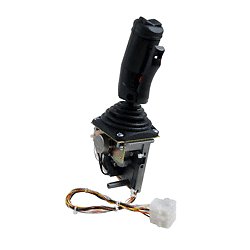