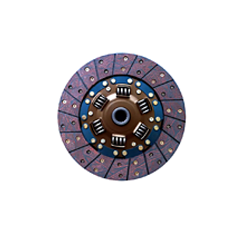 We distribute an extensive selection of FORKLIFT CLUTCH DISC parts for all makes and models. We ship directly from various warehouses located all over North America to provide the fastest shipping at the most affordable prices.

The forklift clutch disk engages and disengages with the flywheel when the wheels need to rotate in the same increments as the engine. Thereafter, the engine does not have to cool off and warm up every time to meet the rotations, thus saving some horsepower in the process. The forklift engine is supported by a number of systems enabling it to transmit engine power directly to the wheels, like any other automobile. The connection of transmission to the engine, and in turn wheels, is established through the clutch assembly. The forklift clutch therefore is an important part of the forklift system. It ensures that the engine does not have to be turned off every time the wheels come to a halt. Wherein, the forklift clutch disk is a component that transmits the important functions of the clutch, itself.

The clutch system is comprised of a number of disks; the clutch disk, pressure plate and friction disk. It is held together by heavy-duty springs, release fork, and diaphragm. The clutch system is connected to the transmission while the friction plates engage it to the flywheel of the engine. When forklift operator’s foot is off the pedal, the springs push the pressure plate against clutch disk, which is in turn pressed against the flywheel. This operation establishes an active contact between the engine and the transmission input shaft, which results in spinning of transmission shaft and the engine at the same speed. The amount of force, which can be held by the clutch depends upon the friction between the clutch disk and flywheel. The force put in by the spring on the pressure plate also determines the force that the clutch can hold. The friction force in the clutch works in a similar fashion as friction works in a braking system. The only difference is that of spring, which presses on clutch instead of weight pressing the block into the ground in the braking system.

Upon pressing the clutch pedal, the hydraulic piston pushes on the release fork. The pushed released fork presses throw out bearing against the diaphragm spring. As this happens, a series of pins outside the spring causes it to pull away the pressure plate from clutch disk. This releases the clutch from the spinning engine and the contact between the two seizes. The springs here do an important task of isolating the transmission from the shock of the clutch engaging.

In the previous century machines, clutches used to hold good for nearly a distance of 70,000 miles or so. The modern clutches however assures of getting a mileage of over 90,000 miles, if used with specific care and kept well maintained. However, if handled carelessly, they can signify break down signs only after 35,000 miles. The problem is most prominent in heavy load carrier trucks or the automobiles frequently towing heavy loads.

The forkliftbeing a load carrier and transporter automobile may run frequently into a clutch disk related fault, since clutch disk eventually wears and requires a replacement. The clutch can fail in various reasons. The most common problem in the clutch disk is wearing out of friction material. This friction is very similar in its properties to the same used in brake pads of a disk brake or the brake shoes of drum braking system. This wearing out of friction material, after a certain stage, will make the clutch to slip away, thereby stopping the transmission of engine power to the wheels.

Most common reason of clutch wearing is the difference in spinning speeds of clutch disk and flywheel. When properly in contact and locked together the friction material is tightly held and the spinning is synchronized. If the forklift driver is careless about slipping his foot from clutch pedal more often during operation, he/she will cause the friction material to wear sooner.

Another problem with the clutch disk can be sticking instead of slipping. If the clutch of a forklift does not release properly, it will continue to turn the input shaft. This would result in grinding and can prevent forklift from going into gear. The causes to this effect can be a broken or over stretched clutch cable, leakage in master or slave clutch cylinders, presence of air in the hydraulic line, which takes space and prevents due amount of fluid required to build up pressure. Last but not the least cause can be mismatched and incompatible clutch components. Other salient issues with forklift clutch can be a “hard” clutch requiring more force on the pedal to depress fully, and the throw out issue with clutch release bearing, which is detectable with a rumbling sound emanating from transmission assembly.

Clutch assembly of a forklift truck is by no means a delicate conglomeration of parts. However, due the nature and frequency of its engagement, it is subjected to heavy and frequent toil. The establishment of contact between engine transmissions onto the wheels is a demanding application, which essentially requires friction. For a newly bought forklift truck, the operator needs to be very careful while depressing the clutch pedal. The clutch needs to be depressed softly for initial running as it increases the life of clutch plate to great extent.

Certain checks are recommended by experts to validate the functionality of the clutch. Turn on your forklift engine with parking breaks activated and in idle state. Listen for a growling noise from inside the forklift transmission. If the noise is evident, the problem lies with the transmission system. In case of no such noise, depress the clutch pedal of forklift and note any chirping noise. If the noise is evident, it pertains to clutch release or the throw out bearing. In cases where neither of the noises exists, try to depress the clutch pedal fully and listen for a squealing noise, which if present, points to a problem with pilot bearing or the bush.

Looking for a replacement is easy, but a number of considerations have to be made, such as the specifications of the disk and the fitment. The specification includes the size or diameter of the disk and the spline count. Both of these are important in ensuring the compatibility of the new part to the factory part, especially when opting for an aftermarket replacement rather than original equipment (OE). On the other hand, the fitment refers to an exact clutch disk that can work for a specific brand or model of forklift trucks. 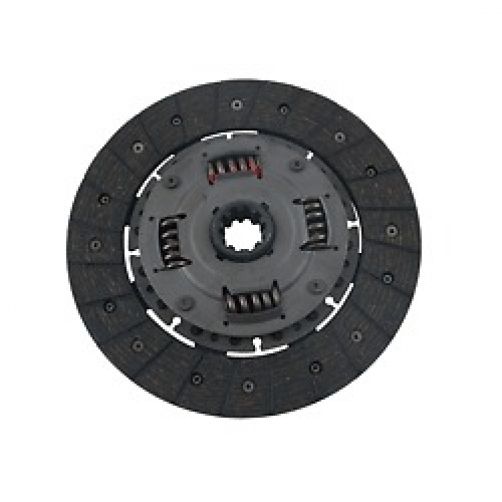 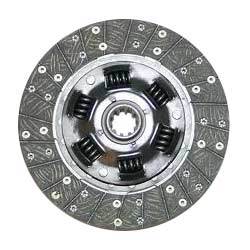