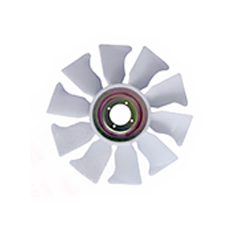 We distribute an extensive selection of FORKLIFT FANBLADE parts for all makes and models. We ship directly from various warehouses located all over North America to provide the fastest shipping at the most affordable prices.

Forklift fan blade is a highly important component of the forklift engine’s cooling system. The fan works to perform the cooling operation for the radiator and without appropriate and immaculate condition of its blades, the fan will fail to deliver at its optimum capacity. Fan blades are made of high capacity durable plastic which is able to sustain high air pressure and is high temperature friendly. They are designed for long term operation with least wearing out. A simple looking accessory, which may be undermined when compared to much more sophisticated and heavy duty forklift engine parts, but plays a role vitally important for the longevity and efficiency of whole engine. Fan blades malfunction can render the entire cooling system unserviceable leading to engine cease down.

Forklift trucks usually are subjected to long duty hours of strenuous weight carrying jobs. They are designed to operate in all terrains and surfaces under all weather conditions that may range from normal to severe and extreme weathers, both in hot and cold climates. Heavy loads are transported to longer distances with safety and security, with the engine working nonstop throughout the whole duration. A continuously operating engine bears the brunt of high temperature and extreme weather conditions and can overheat while running. At this point the radiator fan comes into play aiming to lower the temperature of engine for optimal performance. The fan in the forklift truck attached to radiator complements its operation, where as the radiator acts like a heat sink and heat exchanger to keep the engine at a particular temperature.

Forklift engine performs heavy duty work related to load transportation and hence consumes lot of engine’s energy. This tends to rise its temperature more than ordinary vehicles. Although internal combustion gasoline engines have met significant technical advancements over time, still their ability to convert whole of chemical energy into electrical engine lacks the desired efficiency. A hundred percent efficiency of a machine using chemical energy as input and delivering electrical energy as output is still not possible. Hence, in forklift engines a lot of chemical energy is dissipated in the form of heat energy raising the temperature of engine to much higher counts. An estimate based on several experiments concludes that heat energy produced by a normal vehicle if driven across a highway is sufficient to heat two average sized houses. In case of forklift trucks, however, this energy surpasses the estimate. Hence, the cooling system has to come into play very effectively to prevent an engine catastrophe due to high temperatures. Cooling system transfers engine heat into the air as a primary function. Aside from this function, it also performs certain tasks in which radiator fan blades play the major role.

It is of key importance to note that forklift operates best when its engine has attained a particularly high temperature because a cold engine does not run optimally well and the wear and tear of its parts happen at a fast pace. A standard temperature that a forklift engine coolant should attain and maintain is 200 degrees Fahrenheit. A cool engine, which did not attained the required temperature, therefore emits more pollution and is less efficient. Here, the cooling system of engine plays its part in a converse role initially. The cooling system initially allows the engine to reach a very high temperature as early as possible, brings it down to the optimum temperature level and then tends to keep the engine at a constant temperature.

Liquid coolant circulates forklift truck engine through engine pipes and passages. While passing through pipes and passageways, the coolant absorbs a lot of the heat and thus lowers its temperature. The coolant then reaches the radiator, which serves as a heat sink and heat exchange platform. Radiator is served with a fan, which runs to cool it down when a certain temperature is reached. Radiator here plays a very significant part as it transfers the acquired heat from coolant or water into the air. Radiator with its allied components, the coolant and radiator fan keeps the temperature of engine from reaching a soaring hot state, the radiator fan throws air into it and cools down the coolant.

Forklift and aerial lift engine radiators are equipped with radiator fan, which reduces the temperature, or prevent them from getting too hot. In an effort to keep the radiator fans at its maximum capacities, Fan Blades must be kept in pristine conditions. Fan blades contribute to the overall temperature of the engine by keeping it cool. It enables the forklifts and aerial lifts to run longer work durations without breaking down. Fan blades are important in allowing movement of air throughout the engine.

All engines are equipped with at least one radiator fan, which are also called the condenser or automotive fan. They are typically found in the back portion of the engine. The fans have four to eleven fan blades, which are often made of tough plastic material. The fan blades are curved propellers that meet in the central hub, which connects to the motor. When the engine starts to have buildup of heat, radiator fan dissipates the heat. Precisely, in replacement of the hot air, cool air flows in, cooling the radiator and the other internal makeup of the engine.

As the fan blades are made of hard plastic, they are susceptible to damage and wear. Tiny cracks may appear on it and/or the blade itself may be broken off when neglected. Considering the crucial role it plays on the longevity of the engine, they should always be revisited during regular maintenance. Hot air buildup should be constantly removed by the radiator fan. Henceforth, increasing the life of the engine and avoiding potential complications that may arise from the engine breaking down.

When replacing the blades, one should ensure that the forklift is shut off entirely with its keys removed. Then, for safety purposes, spend a few minutes to allow the engine to cool down and the person replacing the fan blade should wear gloves. New fan blades are generally very inexpensive to purchase.

Solid Lift Parts Inc. have access to extremely affordable aftermarket and OEM fan blades for all makes and models of forklifts. If any fault lines or hint of wear exists on the fan blade, one should replace it immediately. Thereafter it would reduce the risk of having an unventilated engine by simply obtaining a new fan blade at low costs. 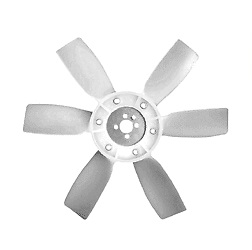