We distribute an extensive selection of FORKLIFT MASTER CYLINDER parts for all makes and models. We ship directly from various warehouses located all over North America to provide the fastest shipping at the most affordable prices.

Forklift Master Cylinder is one of the most important parts of the braking mechanism in forklift trucks. It is essentially a control device, which is responsible for the conversion of non-hydraulic pressure, resulted due to the application of manual force to the brake pedal into hydraulic pressure. This device allows the brake liquid to transfer the applied braking force, duly multiplied, equally to all four wheels. A reservoir of brake oil placed right above the brake master cylinder provides optimized quantity of oil to the master cylinder, enabling it to apply the requisite pressure to the braking system. Besides providing requisite brake oil supply to the master cylinder, it also ensures an airtight atmosphere for the mechanism. It prevents any air intake into the master cylinder, since air intake can seriously reduce the amount of brake fluid to be transferred to the pistons and can result in reduced pressure application.

A malfunctioning of braking systems is unacceptable for any vehicle. It is highly dangerous for the forklift trucks in particular, which usually operate either in the confined environments or outdoors at construction sites. The braking system involves a number of working parts with every part performing a crucial role. A faulty braking system can be attributed to a number of reasons. However, one such major failure that can render the rest of the mechanism untenable, is a faulty brake master cylinder. When it malfunctions, it either may stop to transmit equal pressure to both sets of tires, thereby reducing the Forklift truck’s braking capacity. If it remains uninspected and rectified, the fault may lead to a total failure of braking system. Hence, it is important to inspect the forklift master cylinder from time to time. Certain symptoms may facilitate inspection and can be useful in trouble shooting.

At times, due to old, dusty and worn out brake fluid, some pitting can be observed at the bottom of master cylinder, which ultimately renders it useless. Servicing of master cylinder of the forklift truck can sometimes save the operator its replacement cost. Disassembling and servicing of parts is a technical job and should only be performed by a specialist mechanic, or a working master cylinder may fail to respond at a critical time. Generally, if the master cylinder is failing, there are a few options. The assembly can be fixed by using repair kits. In case it is not salvageable, a new one would have to be ordered to replace the faulty one. Solid Lift Parts Inc. provides all master cylinder parts and repair kits for all makes and models. 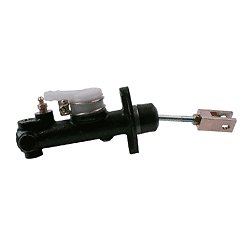