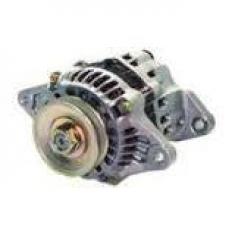 We distribute an extensive selection of YALE - FORKLIFT ALTERNATOR parts for all makes and models. We ship directly from various warehouses located all over North America to provide the fastest shipping at the most affordable prices.

Yale Forklifts are top of the class heavy material handling vehicles. Yale Forklifts come equipped with top notch alternators that ensure a long operating life of the vehicle. Yale alternators are engineered to be tough, to stand the test of time and to be reliable.

Due to the unprecedented development of the electronic systems of modern vehicles, the power consumption of these systems is significant and steadily increasing. The vehicle's electrical charging system must support this consumption and at the same time charge the battery. The alternator is the main component of the vehicle's power generation and charging system.

Alternators are usually found near the front of the engine and are moved by the crankshaft, which turns the piston movement "up and down in a circular motion. Some vehicles use a transmission belt (accessory belt) driven by the crankshaft, but most machines today have a serpentine belt or a belt that moves all components dependent on engine speed. Most alternators are mounted on the engine using a fixed point and a mobile point for adjusting the tension in the coiled belt.

The alternator is a three-phase electric AC motor. It is driven by the thermal engine through the accessory strap. Depending on the electronic systems available in a vehicle, maximum power consumption may reach 1.7-2 kW. The alternator must be able to produce this energy and additionally, charge the battery.

The requirements for the alternator are:

When starting the engine, the battery pack feeds both the car's electrical consumers and the electric starter (starter). After the engine becomes autonomous, the alternator takes over the power supply for consumers, while charging the battery.

Most modern vehicles are equipped with claw-shaped rotor alternators. The rotor produces an alternating magnetic field that induces a sinusoidal electrical current in the alternator stator.