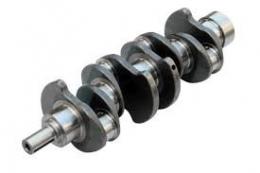 We distribute an extensive selection of YALE - FORKLIFT CAMSHAFTS AND CRANKSHAFTS parts for all makes and models. We ship directly from various warehouses located all over North America to provide the fastest shipping at the most affordable prices.

The crankshaft is positioned inside the engine, fixed by the engine block, through the spindle splines.

The components that make up a crankshaft for the engine are:

The flywheel ensures the regularity of the crankshaft revolution for each engine cycle. As the engine torque is not continuous, it is produced only on the rollover stroke for each cylinder, it is necessary to use a flywheel.

To balance the crankshaft during rotation, the arms may be provided with counterweights. Calibration of these counterweights is done by drilling, with different diameters and depths.

The shape of the crankshaft, or the number of spindle and spindle spindles, is conditioned by the number and position of the cylinders, the order of ignition and the dynamic equalization of the inertial forces occurring during rotation.

The crankshaft is usually made of high-grade steel or, depending on the requirements to which it is subjected, steel alloyed with chromium and nickel or with molybdenum and vanadium.

The crankshaft being a moving part needs oil lubrication on the sections in contact with other parts. Thus, spindles, flanges, and chucks are provided with holes, through which oil is circulated under pressure.

Oil lubrication circuit inside the crankshaft

Crankshafts are manufactured by casting or turning on numerically controlled machines.