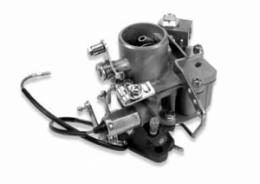 We distribute an extensive selection of YALE - FORKLIFT CARBURETOR parts for all makes and models. We ship directly from various warehouses located all over North America to provide the fastest shipping at the most affordable prices.

The carburetor is an essential part of a Yale forklift’s engine. The Yale carburetor allows air to mix with fuel and allows the engine to operate smoothly. Yale carburetors are well built, making them some of the best in the market.

The carburetor has the role of preparing the air-fuel mixture and delivering it in an amount corresponding to the operating conditions of the engine; besides, it is necessary that the carburetor mixture corresponds to the dosage and homogeneity requirements in order to obtain a uniform and correct functioning of the engine under any operating conditions.

The dose is the ratio between the air weight and the weight of the fuel being sucked at the same time by the engine.

The theoretical or stoichiometric value of the blending ratio, obtained after the chemical composition of the gasoline, is about 15 (this represents a ratio of 15 parts by weight of air and 1 part by weight of gasoline). The flammability limits of the mixing ratio are 6 and 18 respectively, which means that for values ​​lower than ratio 6 (excess gasoline) or higher than ratio 18 (excess of air) combustion is virtually impossible.

A well-tuned carburetor must charge a fuel mixture whose dosing is appropriate for all engine operating modes; it must ensure a correct functioning, both in terms of the necessary power development and in terms of ensuring an economic functioning in operation. For simplicity, it is considered that the dose should be relatively constant for the partial load operation.