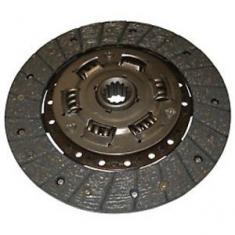 We distribute an extensive selection of YALE - FORKLIFT CLUTCH DISK parts for all makes and models. We ship directly from various warehouses located all over North America to provide the fastest shipping at the most affordable prices.

The Yale Forklift clutch disks are made from quality materials allowing them to operate for a longer amount of time. The Yale clutch disks allow the smooth transmission of engine movement to the forklift’s gearbox, allowing for a good operation of the vehicle. This also makes sure that the engine operates correctly even when the wheels come to a stop.

When the clutch pedal is pressed, the pressure bearing (which is actuated by the receiver cylinder), presses the plate releasing the clutch disc, allowing the gear shift. The double/inertial flywheel has the role of taking over the shocks between the box and the engine when leaving and changing gears.

At the classic flywheel, the shocks between the box and the engine are taken over by the clutch disc through the springs located on it.

How do we shorten the life of the clutch?

Release the clutch pedal suddenly when the gear lever is at a speed. Thus, the transmission suddenly receives the maximum torque and the engine stops being hindered by the inertia force of the car. Such a maneuver can destroy various components of the transmission (planetary axes, clutch disc, etc.). The clutch pedal can only be released suddenly if the gear lever is at the "dead end", in which case there is no danger of malfunctions. To slow the pedal release and at the same time, the strong acceleration of the engine results in skidding (incomplete coupling) of the clutch disc. The friction material (ferrules) on both sides of the disc get very loud, and the springs in the clutch disk that cushion the transmission shocks are degraded and do not work properly.