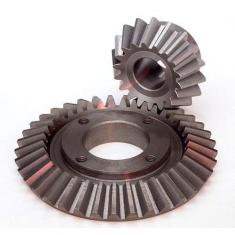 We distribute an extensive selection of YALE - FORKLIFT DIFFERENTIAL parts for all makes and models. We ship directly from various warehouses located all over North America to provide the fastest shipping at the most affordable prices.

In short, the differential is an extremely important component of the car's kinematic chain, located either in the gearbox casing or in its own casing. The differential has several roles - it transmits power to wheels, defines the ultimate demounting of the transmission and, most importantly, allows the wheels to be rotated on which it is mounted at different speeds.

This is particularly the case when turning the wheels when the wheels whose inner and outer part run different distances, so they rotate at different speeds, but also if there is a difference in adhesion between the left and right wheels of the axis in question, at a time when the wheel on a low-adhesion surface revolves faster than the one on a better adherent surface.

In some extreme cases, the wheel on the slightly adherent surface can take over the entire engine power by rotating itself and thus the vehicle does not advance.

Vehicles are equipped with a differential to allow different speeds of the drive axle wheels when cornering when the inward wheel travels a shorter way than the outside. If the movement were to be transmitted directly and the wheels would be rotatable, that in the case of the karts they would have to skate and, in addition to the additional demands on the tires and the mechanical elements, the machine would always tend to run straight, thus strongly subversive.

The differential is the one that takes the rotation movement from the output shaft from the gearbox and distributes it through the planetary shafts to the drive wheels.