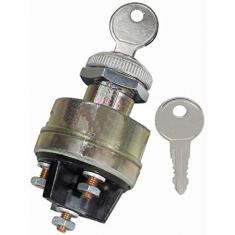 We distribute an extensive selection of YALE - FORKLIFT IGNITION parts for all makes and models. We ship directly from various warehouses located all over North America to provide the fastest shipping at the most affordable prices.

Like any other component of the vehicle, as the ignition is used, it will start to wear out in time. This can cause a lot of issues with the vehicle. When an ignition switch starts to fail, it will produce a couple of symptoms that will give the driver some hints about what is going on.

1. The ignition switch fails while driving

This is one of the most common issues with the ignition switch. The power can cut off while the engine is operating. This will lead to the engine being shut down because the electrical fuel system is no longer powered by the vehicles battery. If this issue is not resolved in time it can cause serious damage to the engine and the electrical system of the car.

2. Vehicle starts and then suddenly stalls

Another symptom of an issue with the vehicle’s ignition switch is a vehicle that starts and then suddenly stalls. If the vehicle stalls when the ignition is on the “on” position, this will cause the fuel system to be cut from the battery and no longer delivering fuel to the engine.

3. Issues powering on the accessories

If the vehicle’s electrical accessories have trouble operating while the ignition is on the “acc” position, is a cause of a failing ignition switch. If the key is inserted and the switch is turned on the “acc” position and the electrical accessories are not working, there is something wrong with the switch. This will require immediate attention since it can damage the vehicle’s electronics.