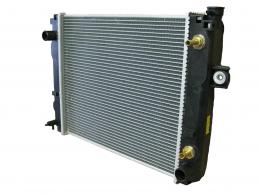 We distribute an extensive selection of YALE - FORKLIFT RADIATOR parts for all makes and models. We ship directly from various warehouses located all over North America to provide the fastest shipping at the most affordable prices.

The radiator is considered to be one of the most complex, important and vulnerable parts of the forklift engine. It allows maintaining an optimal temperature, which prevents overheating of the engine. The radiator is located in the front of the frame, right in front of the engine. It is composed of two upper and lower receptacles - connected together by means of flat tubes, the ends of which are joined by gluing to the receptacles. In order to expand the cooling surface and enhance the rigidity of the system, the tubes are joined by gluing with the hollows of the horizontal plates without interstices. The receptacles, horizontal plates, and radiator tubes are made of brass.

Depending on operating conditions, after starting the engine, the coolant can reach a temperature of up to 120 degrees. After the engine stops and the fluid cools, the pressure inside the system becomes lower than the atmospheric pressure. The elements separated by thin walls are subjected not only to a thermal load but also to a mechanic. In such conditions, corrosion processes are accelerated, involving first the loosening of the parts and the connecting elements, and then the failure of all the parts from which the device is composed. In short - the operating conditions of the radiator are extremely difficult.

We must also remember that the radiator is subject to the influence of several environmental factors: dust, mud, dirt, construction materials - all of which significantly pollute the radiator grille. Every spare part we use has a limited exercise period irrespective of its quality. And the radiator is no exception; sooner or later he will still be spoiled or clogged with dirt that, under the cooling system, "bombs" him continuously. Replacing the old radiator is the most suitable solution in terms of safety.