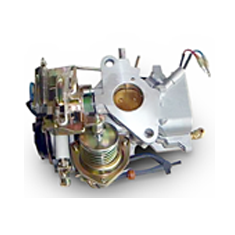 We distribute an extensive selection of FORKLIFT CARBURETOR parts for all makes and models. We ship directly from various warehouses located all over North America to provide the fastest shipping at the most affordable prices.

Forklifttrucksgenerally operate on a gasoline engine served with a carburetor.  All forklifts are electric or gasoline engine operated. Whereas, the diesel forklifts are most widely used as they can be utilized anywhere. A gasoline engine, whether diesel or LPG operates on a simple principle: A small amount of gasoline fuel is burnt to create pressure, which in turn puts the moving parts of the engine into motion and motor or the forklift starts to run. (It may be interesting to note that this process consumes a very minute quantity of gasoline fuel, which is to the order of approximately 10 milligrams, only.)

This process of initiation of combustive cycle, which is responsible for bringing an engine to motion, takes place in a carburetor.  Carburetor is essentially responsible for allowing the correct quantity of gasoline mixed with the air to run the engine properly. It is radically important that just the right quantity of gasoline be mixed with the air. In case less amount of gasoline gets injected through carburetor, engine runs in lean fashion, does not run at all or damage the engine. Similarly, if carburetor supplies more than required amount of gasoline to the engine, the faster it runs, smokier and noisier the engine will become, which also leads to getting badly damaged. Hence, carburetor is the key instrument to ensure engine ignition running at its optimum level.

The carburetor consists of a tube, with a butterfly valve also called the throttle valve. The throttle valve controls the flow of air from the tube. The tube in the carburetor is not of a uniform radius throughout its entire length. At a certain point, along its length, the tube narrows down and widens again. This system is called venture; where eventually a vacuum is created. The venturi narrows down to end up in a small hole before it widens again, and that hole is called a jet. The jet is responsible for drawing fuel in to the vacuum created by the venturi.

The venturi system causes the airflow to speed up or slow down. In an idle state of the engine, the throttle valve is nearly shut and there is hardly any flow of air through venturi and hence no vacuum. On the other side of the throttle valve, there is a sizeable vacuum as the throttle plate restricts the airflow. A tiny hole in the carburetor tube, just behind the throttle plate, draws in the fuel due to creation of the vacuum effect. This tiny hole is called idle jet, to which two small screws are attached, controlling the fuel flow through idle jet and allowing the forklift engine to start and run. All components work harmoniously to ensure efficient and economical workings of the forklift carburetor.

The mechanical linkage of joints and rods exist with accelerator pedal on a car or material handling vehicle like a forklift truck. The small holes in the narrow part of venturi, are responsible for passing the fuel and air mixture to the engine and the jets control the flow of fuel. The fuel that a forklift engine consumes and the speed at which it runs are all dependent upon proper functioning of its carburetor.

How to Maintain the Forklift Carburetor

The carburetor helps better the overall fuel efficiency. Therefore, the carburetor should be maintained regularly, ensuring that it is in its optimal condition. This is possible only if the carburetor and its linkages are clean and properly tuned. The air entering into the carburetor should not bring in any dust or debris. This can be ensured by keeping the air filter clean and working. A dirt-clogged air filter is usually responsible for dark colored engine exhaust. The reason behind this phenomenon is the burning of dust and debris particles with the fuel, which creates foul odor and dark smoke. A cleaned air filter will therefore block any dirt or debris from going into the carburetor and prevent dark smoke from the exhaust.

Having finished with the air filter and its cleanliness or replacement, all of the linkages are to be inspected. The linkages to throttle or choke plates can get sticky or stained. Moreover, carburetor screws may also lose their initial adjustment due to prolonged running of the engine. Dust particles and other debris may also clog the fuel and air passage inside carburetor to reduce its efficiency or eventually stop the engine.

A few steps are involved to eradicate any problem with the carburetor. Essentially, the problem may pertain to either a blocked fuel supply or the air intake. Hence, both would have to be dealt with on a turn basis. For a fuel supply issue, remove air filter and inspect the choke plate. Choke plate should ideally be opening and closing freely. If not, it may be the cause of fuel blockade to forklift engine. Carburetor cleaner sprays come handy to deal with this problem, spray a small amount on to the choke plate shaft and the venturi to loosen its grip.

Next, the fuel valve should be inspected to see the blockade, a proper servicing of the fuel pump can eradicate the problem at hand.  Spark plug should be checked for its condition, a wet spark plug may indicate an overly rich mixture of air and fuel or presence of water in the fuel. Hence, the issue can be resolved by first cleaning the spark plug and then paying attention to the fuel filter. Fuel filter should be serviced to perform at its optimum, so that it can refrain dirty or watery fuel to be passed onto the carburetor. Spark plug can be cleaned by putting in a teaspoon of the fuel inside its hole, attach it back and start the engine. Spark plug may also suffer over dryness which should be taken care of.

Having dealt with the fuel and air supply issues, servicing of the carburetor assembly itself should be done. The operator should ensure use of recommended cleaning solution to clean dirt or grime that may have accumulated over time. The jets and all ports should be cleaned the right way to facilitate the flow of air and fuel. To fully clean these components, an air compressor can also be used. 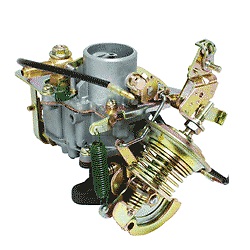