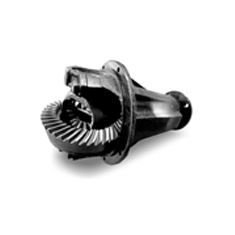 We distribute an extensive selection of FORKLIFT DIFFERENTIAL parts for all makes and models. We ship directly from various warehouses located all over North America to provide the fastest shipping at the most affordable prices.

Forklift differential is a type of a simple planetary gear train. It is a mechanical device which limits the amount of torque to be transferred to moving wheels in an automobile or a forklift truck. It consists of a number of parts such as pinion drive gear, ring gear, side/ spider gears, differential case assembly, rear drive axle & bearings and axle housing. Pinion drive gear performs transfer of power from the drive shaft to the ring gear. Ring gear further transfers it to the differential case assembly. Side/ spider gears facilitate drive wheels to turn independently while making a turn. Differential case assembly performs to hold ring gear and other components, which drive the rear axle. Rear drive axles are the steel shafts which transfer torque to the drive wheels. Rear axle ball bearings fit between axle and axle housing. Whereas the axle housing encloses and supports rear axle assembly and its parts.

The Forklift Differentials perform three different roles. First, it focuses the engine power at the wheels. Second, it serves as the final gear reduction of the forklift and effectively slows down the rotational speed of the transmission before it hits on to wheels. Lastly, the differential transfers the engine power to forklift wheels so that they can rotate at different speeds.

Differentials are devices that can split the engine torque into two so that wheels can spin at different speeds. The phenomenon of wheels of a forklift, or any automobile, spinning at different speeds may seem difficult to comprehend. In effect, it does not happen every time during the drive. The phenomenon gets pronounced when the forklift trucks makes a turn. While making the turn, both of the driven wheels do not spin at same speed because if they do, there are all the chances that one of the tires slips causing an accident to the forklift truck. While making the turn, both driven wheels (front or rear), have to travel dissimilar distances, as the inwards tire travels less distance in comparison with the outer one. Now, since they make the turn in same time, the speed of inner tire has to be less than the outer. This is where the differential comes into play.

The solution to the problem comes in the shape of a Limited Slip Differential (LSD). Limited slip differential utilizes its mechanisms to perform normal differential actions while negotiating a turn and in case of a slip tire, provides additional torque to the non-slipping wheel of a forklift. Different types of LSDs are clutch type LSD, the viscous coupling, the locking differential and torsen differential.

The clutch-type LSD shares some similarities with the open type, but primarily features the spring pack and a few clutches. The clutch type LSD is the most known type of limited slip differential. It matches an open differential in its components with the addition of a spring back and set of clutches. The clutch type LSD serves to resolve the problem of a forklift driven with one tire on the ice and the other on the ground. The forklift will move forward though not with its full power.

The viscous coupling differential is found in almost all 4 wheel drive forklifts. It serves to establish the linkage between front and rear wheels so that, in case one set of wheels start to slip, the torque can be transferred to the other non-slipping set of wheels. In a viscous coupling, the force applied between the fluid and set of plates is very similar to the force applied between the shell and yolk of an egg set to spin. The other type of differential, the locking differential, suits the needs of off road or cross-country drives. It has similar parts as that of an open differential, but is equipped with some electric, pneumatic or hydraulic mechanism to lock both of the output pinions together. The mechanism is manually activated in most of the cases. When one wheel gets off road the other wheel will not be affected and both wheels of the forklift will continue their spin at the same speed.

The torsen differential is all together a mechanical device with no involvement of electric, clutch or viscous fluids. The word “Torsen” is originated from Torque sensing. This also behaves as an open differential when same amount of torque is reaching each wheel. In case of loss of traction by one of the wheels, the gears in torsen differential binds together. Design of gears in the torsen establishes the torque bias ratio. Torsen differentials are widely used in all wheel drive vehicles. 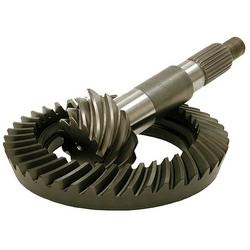 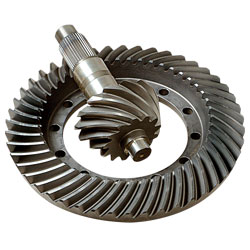 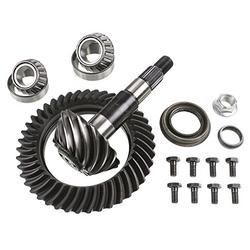