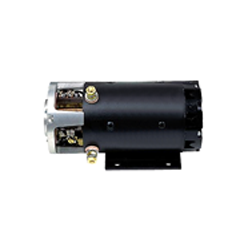 We distribute an extensive selection of FORKLIFT ELECTRIC MOTORS parts for all makes and models. We ship directly from various warehouses located all over North America to provide the fastest shipping at the most affordable prices.

Forklift electrical motors power a wide range of Electric Forklift trucks, which are best utilized for indoor environments. They are ideal for the environments where it is important to keep exhaust emissions at a bare minimum and avoid loud engine noises.

Electrical forklifts, in recent years, have made their mark quite prominently on the horizon of material handling equipment. They use electric batteries as a power source, which needs to be charged separately or during drive with built in generators.

Electrically operated forklifts are powered by alternating current (AC) or direct current (DC) motors. In the initial phases of their development, electric forklift trucks only used direct current motors, since the lead acid accumulators utilized at the time only supplied DC. Motors were controlled by adding resistors in their circuitry. However, modern technology uses power electronics to exercise control over electric motors. The DC battery motors necessitated the use of carbon sliding contacts for flow of current, which require continuous maintenance and servicing. Whereas, the AC driven motors did not need carbon sliding contacts and hence are virtually maintenance free. However, complicated electronic circuitry is involved for getting an AC output from DC batteries.

The axle of an electric motor holds the armature and commutator. The armature is electromagnetic, usually comprising of a few metal plates stacked together with metallic wires (generally copper) coiled around these plates. Ends of wires are soldered to terminals and the terminals are wired to commutator plates. Provision of field magnet is made in the housing of the motor and various methods are used for several types of electric motors.

The electromagnet is made to change its polarities successively, which means that its north and South Poles keeps changing in a way that the electric motor continues to spin without interruption. This happens when similar poles of electromagnet and field magnet face each other. Their internal repulsion will cause the electromagnet to spin, making its north pole come in front of the south of the permanent magnet. Now, if at this precise time, the polarity of electro magnet changes, changing its North Pole to the South Pole, it will again, be repulsed and the motion will continue. The time of changing of polarity of the electromagnet is responsible for the uninterrupted spinning of electric motor.

The commutator and the brushes work together to provide current to the armature. They are also responsible for altering the polarity, meaning the changing of direction of flow of electrons in the armature, which results in changing its polarity as an electromagnet. Brushes are simply metal springs or carbon made, which make contact with the contact points of the commutator and pass current.

The battery of an electric motor used in forklift trucks usually has more than two poles. More than two poles facilitate continuous spinning of the motor uninterruptedly as compared to two pole battery. Any number of poles is possible for electric forklift batteries, as it is dependent on the size of the motor and its application.

All indoor forklifts use electric motors operating on 12, 24, 36, or 48 VDC batteries. They usually utilize lead acid batteries of 10-75KWh capacity for traction, steering and lifting power. These batteries also add counter weights for providing counterbalancing forces against the lifted load, adding to the balance of the forklift. The hydraulic lift pump of forklift also operates on an electric battery, using a lift jack and with a system of chains and rollers.

If the forklift uses the DC motor, then the motor would run from 96 to 192 volts. The DC motor is the most popular type used in most brands and models of forklifts in the market. The forklifts powered by the AC motor come as a three-phase AC motor that can run at 240 volts. An ordinary motor perform in the 20,000-watt to 30,000-watt range. This type of motor includes a feature that allows the operator to overdrive it. This means that the forklift truck is given a boost of power for a brief period of time. The only limitation is that there is a big chance that the motor will heat up and fail.

The AC type on the other hand allows for the use of heavy-duty, three-phase electrical motors. An interesting feature of the AC motor is that it has a re-gen feature. For example, when the operator applies the brake, the electrical motor will be used as a generator and send power to the batteries. 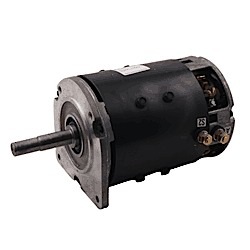 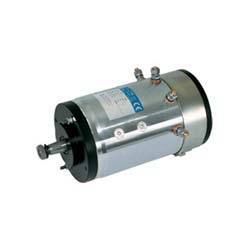