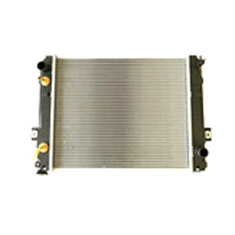 We distribute an extensive selection of FORKLIFT RADIATOR parts for all makes and models. We ship directly from various warehouses located all over North America to provide the fastest shipping at the most affordable prices.

Radiators form an essential part of all the internal combustion and gasoline engines in the automobiles. The forklift trucks are also served with efficient and heavy-duty radiators for optimum engine performance in highly demanding work conditions. Radiators used for automotive applications are meant to provide cooling effect to the engine. With a radiator in place, the engine will retain its best workable temperature to perform as expected.

Radiatorforms part of the cooling system of a forklift truck, the system responsible for maintaining an optimum temperature in the trucks’ engines. Forklifts trucks, when put to work, are often subjected to long duty hours and strenuous engagement. They are operated in all parts of the world in varied climatic conditions from normal to severely hot or cold climates; responsible for carrying and transporting heavy loads for varied length of distances. Since the engine is always on the go experiencing very high temperatures, it is obvious that the engine will withstand the worst of work environment under varied weather conditions and will overheat along the way. The cooling system of the engine thus works to maintain an optimum temperature by allowing coolant liquid or water, stored in the coolant compartment and subsequently the radiator. This coolant passes through pipes running along the whole engine and absorbs radiant heat. The fan inside the forklift will work to complement the operations of the radiator.

A Forklift Radiator is used as a heat exchanger in internal combustion engines. It cools the engine by replacing the heat from the hot coolant with cooled coolants with air blown by the fan. The radiator consists of a core passage which connects between the header tanks. It consists of a circuit that cools the warm engine coolant that passes through. It is generally made of aluminum because aluminum is light weight, inexpensive, and has acceptable thermodynamic qualities.

A forklift engine while in operation tends to produce a lot of heat. Although internal combustion gasoline engines have come a long way in technical advancement, their efficiency in terms of converting most of the chemical energy into electrical energy remains questionable. The reason is that most of the chemical energy is dissipated in the form of heat and this is the responsibility of the cooling system to keep the engine at optimum temperature. As per estimation, cooling system of a car moving on highway dissipates such an amount of heat, which is sufficient to heat two houses of average size. Such an enormous amount of heat needs preferred handing to prevent forklift engine’s overheating.

While trying to ensure cooling down internal combustion engine of the forklift, it is imperative to understand that forklifts operate best when its engine have attained a high temperature. The reason is because in a cold engine, the wear and tear of parts happen at a fast pace. A standard temperature that a forklift engine coolant should attain and maintain is 200 degrees Fahrenheit. A cool engine therefore emits more pollution and is less efficient. Here again the cooling system of the engine plays its part in a converse role initially. The cooling system of the engine allows the engine to reach the higher temperature as early as possible, cools it down to optimum temperature and then tends to keep that temperature constant.

Forklift radiators are generally found in the front of the engine bay. In the engine block, liquid coolant is warmed by the friction created by the engine. Then, the warm/hot liquid coolant is pumped into the radiator. Due to the cool, fanned air contacting the large surface area of the radiator, the liquid is cooled. Radiator fan here plays a very important role. It sucks out the hot air from the radiator and expels it to outside atmosphere. This effects in lowering the temperature of water or coolant in the radiator, which is again passed through the internal combustion engine and helps lowering its temperature.

The construction of the forklift radiators is simple. Therefore, it is reparable when there is a mechanical breakdown. Typical problems with the radiators are degradation of materials, leaks in header tanks, and loss of coolant. Leakages can occur in the rubber hose channel between the engine and the radiator. Also, leakage can occur within the engine itself, where the coolant is burnt on the high temperature of the engine, creating white smoke and preventing the cooling of the engine.

Fixing a forklift radiator requires the work of a professional mechanic. But, there are some temporary fixes that can be made. First, cooling down the engine and radiator is important as it can be extremely hot to the touch, resulting in burns. Water can be added to cool down the engine naturally. Water can also help locate the leak such as a pinhole or a rupture in the system. Another way to locate the leak, prior to cooling off the engine, is identifying where there is steam shooting out.  Once everything is cooled off, the radiator cap can be taken off. There are multiple ways to seal the leak:

Once the above steps are complete, to ensure that the leak is sealed completely, a radiator cap should be installed. Finally, the forklift should be taken to the repair shop for the professional mechanic to fix the radiator leak appropriately.

As the above steps are only temporary fixes, new parts will be required to replace them. Solid Lift Parts Inc. provides forklift radiator parts for all makes and models. At situations where a temporary fix is impossible, the forklift owner should contact Solid Lift parts Inc. immediately to get them the part right away. 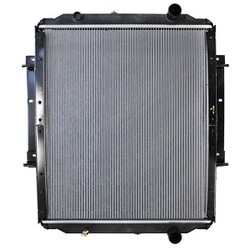