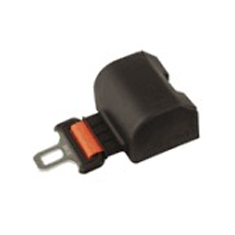 We distribute an extensive selection of FORKLIFT SEAT BELTS parts for all makes and models. We ship directly from various warehouses located all over North America to provide the fastest shipping at the most affordable prices.

Seat Belts are one of the most important safety features of a forklift. Ignoring the use of seat belts may lead to serious repercussions and possibility of death. Unlike cars, its main purpose is to better the chances of survival of forklift operators in an event of the forklift tipping over, not a speed collision. When the forklift starts to tip, operators would have a natural compulsion to jump out. Jumping out can lead to the operator getting crushed by the weight of the forklift or “mouse-trapped” underneath the forklift. Hence, the seat belt holds the operator in place when the forklift tips over and constraints him/her from jumping out. Additionally, although the travel speed of a forklift is moderate, at an instance of a collision, the operator may be flown out of the seat, which may result in serious injuries. Seat belts keep the operator strapped to the vehicle, hence the person would move with the momentum of the other heavier counterpart, forklift, in a collision.

Seat belts are available in various types: Lap, Sash, Three-point, Belt-in-Seat (BIS), 4-, 5-, and 6-point, and Seven-point. Often, Lap belts are used in a forklift. Generally used in airplanes, lap (“2-point”) belt straps the operator by their waist. Lap belts are comfortable to wear and adjust easily. Though in cars, they are found to be not the safest seat belt. In a high vehicular collisions, people were victim to lumbar vertebrae separations and sometimes paralysis. Therefore, the 3-point seat belts became mandatory for automobiles. On the other hand, for the forklifts, due to the moderate speed of travel, lap belts meets the requirements and are sufficient enough to hold the person in place in an event of the forklift tipping over.

Once the employer or operator recognizes that their forklift does not have a seat belt, the employer has to notify the manufacturer and request that they retrofit the seat belt under the retrofitting program because mousetrapping hazard is present. Additionally, if the employees refrain from wearing the seat belt during forklift use and this fact is revealed to the OSHA, the employer would be at fault for failing to comply. It is the employer’s responsibility to ensure that their employees are always working under safe conditions, with their seat belts strapped. Failure of the employer following through with the manufacturer or ensuring their employees’ safety to comply with the OSHA can lead to penalties. The determination of the amount of the penalties depends on the degree of danger that exists.

Seat belts generally do not wear and tear easily. The locking mechanism may have issues over time, becoming difficult to lock and unlock. This is another safety issue because if the seat belt is not latched on properly, then it would not strap the user, hence not functioning as a safety device as it is intended to be. On the other hand, if the seat belt frequently gets stuck and do not unlock easily, in an event of the forklift tipping over, the user may not be able to remove him-/herself free to safety. Also, some older forklifts do not have seat belts already installed by the manufacturer. In either cases, a new part or a complete retrofit seat belt assembly is required. Solid Lift Parts Inc. recognize the importance of safety at the work place. SLP has seat belt parts readily available for all makes and models at affordable prices. Place an order today! Safety cannot wait another day! 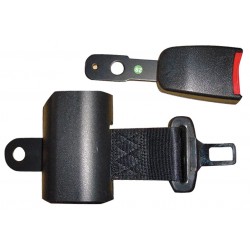