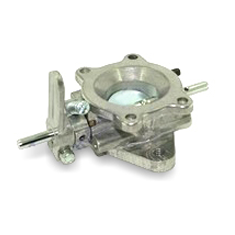 We distribute an extensive selection of FORKLIFT THROTTLE BODY parts for all makes and models. We ship directly from various warehouses located all over North America to provide the fastest shipping at the most affordable prices.

The Forklift Throttle Body is part of the air intake system, tasked to help manage the air flow and the consumption of fuel for forklift trucks. The intake system and the throttle bodies are used in fuel-injected systems, and its main objective is to regulate the amount of air and fuel mixtures that comes into the engine.

Mass airflow sensors that are mounted on the throttle bodies are electrical components that monitor the volume of air flow, which enters the engine. This sensor system provides the volume information to the internal computer of the forklift, which then regulates the amount of fuel that is mixed with the air. Henceforth, the mixture of fuel and air that combusts in the cylinders are balanced.

Another sensor located in the throttle bodies sense the valve positions, controlling the airflow and the opening speed of the valves. It works coherently with the mass airflow sensors in adjusting the amount of fuel that is mixed. The sensor also monitors the rate of speed at which the valves are opened and adjusts the amount of fuel mixture to improve the acceleration and throttle response.

Some throttle bodies have fuel injectors inside of the throttle body. With this arrangement, fuel is mixed as the air flows in when the air valve is opened. Then, the mixture is directed into the cylinders via intake runners. Other types have the throttle body and injector for each cylinder.

Over age and extensive use, the throttle body can wear or accumulate dirt, causing the forklift engine to stall during operation. Constantly maintaining the throttle body is an easy task that should be done on a regular basis. First ensure that the engine is shut off and the keys are out of the forklift ignition. With the throttle body in sight, ensure that all wires are connected to the sensors. Vacuum hose can be causing the problem as well. Check that the hoses are not damaged or pinched and on tightly around the valves. Due to the engine exhaust pipe or gas recirculation pipe, they can be burnt or cracked. If by observation, both the connections and hoses are determined to be okay, check the inside of the throttle body as dirt accumulation could cause it to clog. Simply remove the hoses and wires from the throttle body and connect them to an air cleaner housing.

Cleaning the inside of the throttle body requires a professional tool named the Intake Snake. It is the safest solution as other solutions can be extremely damaging to the component. Intake Snakes are sold with a safe solvent with a soft scrubbing tool. Often times, throttle bodies have a protective coating that minimizes buildup of dirt and other solvents and scrubbing tools can remove it. Also, the sensor tips found inside the throttle plates can be damaged.

Once the problem in the forklift throttle body is found to be irreparable, a new replacement part is required immediately. Solid Lift Parts Inc. provides throttle body parts for all makes and models of forklifts. Contact your parts specialist today to get you the right part, right away! 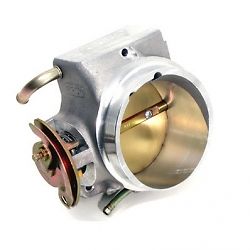 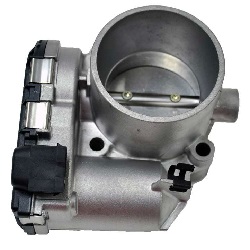