We distribute an extensive selection of FORKLIFT TRANSMISSION parts for all makes and models. We ship directly from various warehouses located all over North America to provide the fastest shipping at the most affordable prices.

The Forklift Transmission is a crucial part that enables the movement of the forklift. It is a component of the engine assembly which connects both the engine and the wheels, allowing them to rotate in sync with each other. When the engine operates at varying ranges of revolutions per minute (RPM), transmission provides the conformity between the engine rotation and the wheel rotation, keeping them in balance. The main job of a transmission system, whether manual or automatic, is to let the engine operate at narrow ranges of speed while at the same time providing a wider range of output speeds.

As the name suggests, the gears work like the planetary solar system, in that they are configured with the largest gear in the center with varying number of smaller gears rotating around it in an orbit-like fashion. It is almost the same size as a cantaloupe and is the only part responsible for creating all of the gear ratios which transmission can produce. All other parts facilitate the planetary gear set. A planetary gears system has three parts, the sun gear, the planet gears and the ring gear. Each of the components serve different roles at different times, any of them can be input, output or may remain stationary. The gear system is complete with input and output shafts for manual transmission forklifts.

Stator is present in the center of the torque converter. It redirects the fluid coming back from turbine before it contacts the pump again. If the fluid is not stopped and is allowed to hit the pump, the engine will slow down and the power will go waste. This helps increasing the efficiency of torque in a big way. The redirection of fluid in an opposite direction is due to the way stator blades/ fins are designed. Stator has a clutch inside it, which only allows it to spin one-way, i.e in the direction opposite to the flow of fluid. During motion, transmission fluid is forced into the stator, through the turbine, by the pressure from the pump. When the forklift is not mobile, the turbine would slow down because less fluid enters. Then, the stator would get locked until the turbine speed returns. Computer sensors monitor the forklift speed, engine load, pedal position, etc. to conduct the process of gear shifting.

Over time and extensive use, transmissions can be problematic. There are various indications of a transmission that needs either to be repaired or replaced. 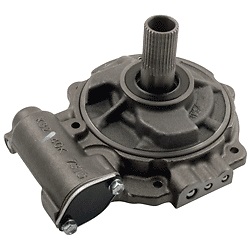 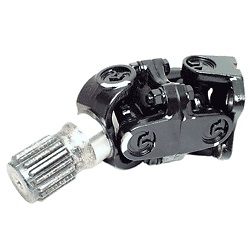 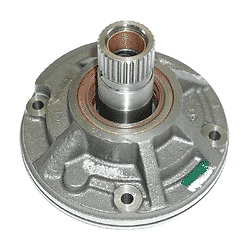