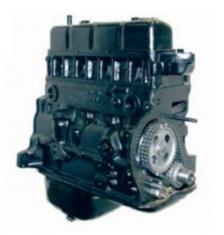 We distribute an extensive selection of NISSAN H20 FORKLIFT ENGINE parts for all makes and models. We ship directly from various warehouses located all over North America to provide the fastest shipping at the most affordable prices.

The engine still gets high respect and credibility mainly because it is made by one of the leading forklift engine manufacturers in the industry today, Nissan. Here are some of the essential information people may want to learn about the powerful specs of the Nissan Forklift H20 engine.

The Oldest and Most Trusted

It’s fair to claim that the Nissan Forklift H20 is considered as Nissan’s oldest variation of its forklift engine selections. With its serial number beginning with an S, this variation of the engine is characterized by having its thermostat directly mounted on top of its cylinder head. So many engines out there try to integrate this structure into their engine, but it seems that only Nissan has been able to generate such design with minimal error and maximum increase in productivity and power to the forklift.

Aside from this proprietary location of the thermostat, the H20 has also two different oil pan depths. With its first oil pan depth having 4 1/2” shallowness, this engine enables many operators to get the most out of their construction projects. The deep pan of this engine is 6”, measured from the pan rail to the pan’s bottom. This engine has also been characterized to have two cylinder heads classification. The first cylinder is a “two-bolt thermostat” and the second one would be the “three-bolt thermostat”. Both cylinders offer exceptional added options for operators and business owners to maximize the operations they employ in complicated projects.

It must be added here that the power of this engine doesn’t end at having two cylinders. It also bears noting that this engine has two bolt holes installed to each other that are evenly spaced along the opening of the thermostat. This gives the engines a stable structure and gives more options to the operators because they won't see the housing of the thermostat separated from the bolt holes.

What’s also interesting to note in this engine is the fact that its oil filter is designed to spin onto what could be considered an aluminum oil filter that houses the bolting to its side of the block. The stable frame of the aluminum lends a phenomenal strength to the engine that not many engines out there can compete with.

A History of Excellence

This fantastic engine from Nissan has been created mainly for the incredible dedication of the staff that builds the core of Nissan today. Since 1978 the world sees Nissan as a brand that can generate forklift systems that have solutions to clients, including the H20 engine. This engine, along with the rest offered by Nissan, go way back in 1978, generating answers that not many of the brands competing can provide, and improving the growth of other companies in ways that see incredible market growth.

It can be said that these forklift systems that answer the company’s construction problems are able to do so because of the perfection it has reached for creating narrow aisle reach trucks and order pickers. The narrow aisle and motorized hand pallet trucks that Nissan has offered to the industry it is in have also rendered a fantastic avenue for more opportunities and business growth.

An example of this exceptional forklift from Nissan that employs the H20 Engine is the Nissan JP50 Forklift. This forklift is known for its exceptional ergonomics and safety design, as well as its performance and durability. Because of the H20 engine, the JP50 is able to have an independent float system (IFS) that helps operators maneuver better, giving them better control and lowering the vibration they feel for every point of the operator’s contact with the terrain.

An added bonus in this forklift is the fact that it has a break and inching pedals that are mounted to the truck frame. This enables the operator to get a better touch of where the vehicle should go and reduce pedal vibration. It is because of the H20 Engine’s power and smooth steering wheel vibration that this forklift can run this way.

It should be mentioned that the H20 engine in this forklift also gives the vehicle an exclusive single lift/tilt lever that allows for lifting and tilting that happens simultaneously. This is hard, and rarely can be done by other forklifts, but because of the precise engineering this engine has, it’s easier for the vehicle to run its operations in the smoothest way possible.

The forklifts that use the H20 engine are also characterized to be having fewer grease fittings that give way for better access during maintenance. Forklift of this engine also has a side thrust roller on their fork carriage for easier access for carriage adjustments. The serviceability of forklifts is also bolstered and pushed to their optimal range mainly because of how exceptional the design and structure of this engine today.

It can be added here that the forklifts with the H2o engines contain hydrostatic power steering that helps reduce the strain and stress that the operator feels while operating the vehicle. The low front cowl design of the JP50 with its heel/toe pedal design is possible today because of the perfect synch that the H20 engine provides for the forklift.

The H2o Engine is used in various industrial forklifts by Nissan. With its remarkable reliable performance and compatibility in Nissan’s forklifts, it’s easy to say that this engine deserves the renown and high reputation it receives from the market today.