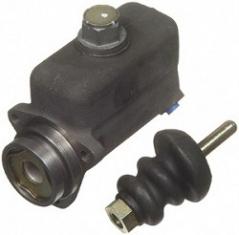 We distribute an extensive selection of CLARK FORKLIFT BRAKE MASTER CYLINDER parts for all makes and models. We ship directly from various warehouses located all over North America to provide the fastest shipping at the most affordable prices.

Clark manufacturers all the forklift parts from its manufacturing facility in Kentucky and this material handling facility ships products to all the different locations of the country. Clark genuine parts can be obtained by forklift owners from Solid Lift Parts as well. It is essential to use only original parts and never settle for cheaper replacement products or repairs. In the long run, these activities would create adverse effect on the equipment. Forklift owners should maintain their trucks in the best quality possible. Brake master cylinder component would be different from one Clark forklift model to another. At the moment, Clark offers 24 different forklift truck models. Factories should make sure that they find out the suitable brake master cylinder component for their forklifts.

This forward motion would activate the subsystems. Movement of the primary piston creates a hydraulic force and this force pushes the secondary piston forward. Movement of both the pistons would create a massive hydraulic force which would then be transferred to the wheel cylinders. This action results in braking of the forklift. When the brake pedal retracts back to its original position, the piston would allow the brake fluid to be refilled from the reservoir, if there is a space for it. Fluid level inside the master cylinder would be monitored using sensors. Reservoir fluid level indicator would indicate whether it requires refilling or not. After certain period of running, forklift owners should refill the reservoir with new brake fluid. Brake light would indicate whether there is any fluid imbalance in the reservoirs. Genuine Clark forklift brake master cylinder brake fluids should only be used by the operator. By using a faulty or duplicate brake fluid, the operator would contaminate the braking system which would lead to braking failure. Brake failure could cause huge damage to the factory, equipments and even employees. Occupational Health and Safety standards should be maintained at all times.

Quality and genuine parts can be purchased online from our website. If there is any leak in the brake master cylinder system, the operator should find out the leak as soon as possible. Braking related issues should be rectified quickly because it is one of the most important safety features.